Portion of Hwy. 38 Renamed in Honor of Fallen Native Son 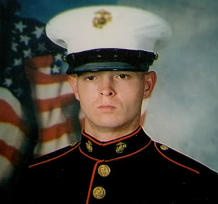 Larry Wells joined the marines shortly after graduating from Mt. Hermon School in 2002. Larry was deployed twice during the Operation Iraqi Freedom war. During his second deployment his unit was sent to the holy Shia "Wadi al Salam" cemetery of An Najaf, Iraq where some of the most intense fighting occurred. On August 6, 2004 Larry was hit by sniper fire. He was the only Company C, Battalion Landing Team 1st Battalion, 4th Marine Regiment, 11th Marine Expeditionary Unit (Special Operations Capable) Marine that died during the vicious fighting against Sadr's Mahdi Militia.

In 2005 the Fanguy family started a scholarship fund that would give one Mt. Hermon Senior each year a $300 cash scholarship. To apply for the scholarship seniors write a 500 word essay on “What Freedom Means to Me”. Joni says this is a way to keep Larry’s memory alive.

In 2020 Joni Fanguy Sanders contacted Senator Beth Mizell’s office on the process of renaming Highway 38 in memory of Larry. On March 9, 2020 the bill was introduced to the Senate. All non Covid-19 activity in the senate was suspended soon after. A year to date the Senator pre-filed the bill again which passed and was signed by the Governor on June 1, 2021.