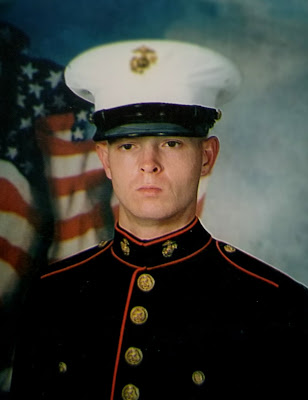 Larry Wells moved to Mt. Hermon in the fall of 1993 when he and his siblings were placed in foster care. Larry was well liked and quickly became friends with many of his classmates. One in particular was Joshua Fanguy. By the sixth grade you could find Larry hanging out and going places with Joshua and his family.

Larry remained at Mt. Hermon until his 11th grade year. He moved into the Pine community and quickly made lasting friendship there also. At the end of that school year Larry moved in with the Fanguy family. Larry loved the military and talked about joining most of his high school years. He decided on the Marines and left for boot camp shortly after graduating from Mt. Hermon School on 2002.

He was so proud to wear that “Dress Blues” uniform, said Joni Fanguy Sanders. Larry chose infantry as his MOS. “He wanted to make a difference”, he once said. He was stationed at Camp Pendleton in California soon after Boot Camp. It wasn’t long after the Operation Iraqi Freedom War began.

Larry’s was deployed twice during the war, in late spring of 2003 and 2004. During his second deployment his unit was sent to the holy Shia "Wadi al Salam" cemetery of An Najaf, Iraq. This was where some of the most intense fighting occurred during the war. During this battle on August 6, 2004 Larry was hit by sniper fire. He was the only Company C, Battalion Landing Team 1st Battalion, 4th Marine Regiment, 11th Marine Expeditionary Unit (Special Operations Capable), Marine that died during the vicious fighting against Sadr's Mahdi Militia.

In 2005 the Fanguy family started a scholarship fund that would give one Mt. Hermon Senior each year $300 cash scholarship. To apply for the scholarship seniors write a 500 word essay on “What Freedom Means to Me”. Joni says this is a way to keep Larry’s memory alive.

In 2020 Joni Fanguy Sanders contacted Senator Beth Mizell’s office on the process of renaming Highway 38 in memory of Larry. On March 9, 2020 the bill was introduced to the Senate. All non Covid-19 activity in the senate was suspended soon after. A year to date the Senator pre-filed the bill again which passed and was signed by the Governor on June 1, 2021.

On August 1, 2021 the bill will be in effect renaming Hwy 38 from Clifton to the Tangipahoa parish line the L Cpl Larry Wells Memorial Highway. A dedication ceremony will be held in November.

Joni Sanders would like to thank everyone for their support of this project in honoring Larry. He was part of our community and ultimately gave his life for us and his country.

An account has been setup at Citizens Savings bank in Franklinton, LA for anyone who would like to make a donations to help cover the expenses of the road signs to mark the highway at each end of Hwy 38. The total price of the two signs is about $1200. Any donations that exceed this amount will be transferred to the L Cpl Larry Wells Memorial Scholarship account to continue sharing his story and his memory at Mt. Hermon School.