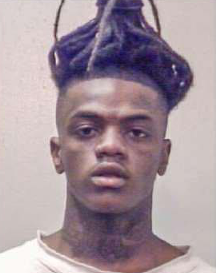 Following his October 30, 2021 arrest by the Bogalusa Police Department, Javorius Tykies Scott, age 23 and a resident of Avenue I in Bogalusa, was held in the Washington Parish Jail on multiple charges including two counts of possession of illegal drugs, possession of illegal drugs with a weapon present, illegal use of a controlled dangerous substance in the presence of a minor, obstruction of justice, child desertion, contempt of court, having a switched license plate, second offense child restraint violation and no proof of insurance.

The October 30th arrest follows an incident on August 20, 2021 when Scott was observed driving in a reckless manner in Bogalusa at a high speed with the passenger door of his car open. Once the vehicle yielded to a Washington Parish Sheriff’s Office unit, it was discovered that Scott had two passengers in his vehicle. One was an adult female while the other was an infant sitting unrestrained on the lap of the female. Scott was cited for careless operation of a vehicle, no child restraint and driving with a suspended driver’s license. He was issued a summons arrest to appear in court to answer the charges.

Scott, known as rapper JayDaYoungun, has three previously reported arrests. In April 2020, the Newnan, Georgia Times-Herald newspaper reported Scott was arrested on April 21, 2020 in Coweta County, Georgia. The newspaper reported Scott and other occupants of a rental property were arrested and charged with possession of marijuana with intent to distribute, narcotics possession and tampering with evidence. The Coweta County Sheriff’s Office reported several bottles of codeine cough syrup and several oxycodone pills were also found, along with several firearms and a quantity of cash. Click here for our related story

According to the Times-Herald, Scott was previously arrested in Harris County, Texas, on a family abuse warrant, accused of striking a pregnant woman. He was reportedly apprehended by police after he was found hiding in the attic of a home. During the arrest, officers seized $24,000 in cash along with oxycodone, promethazine and several firearms where they found Scott hiding.

WVUE television, a New Orleans station, reported on September 20, 2021, that Scott had been arrested on September 16, 2021 by the Tangipahoa Parish Sheriff’s Office on charges of accessory to second-degree murder and obstruction of justice. The station reported Scott was released after posting a $175,000 bond. The television station also referenced the previous arrests in Texas and Georgia as well as a 2019 arrest in Gadsden County, Florida, on drug charges.