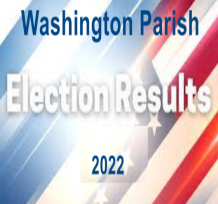 With all precincts reporting, unofficial results reported by the Louisiana Secretary of State are as follows:

Mayor of Bogalusa - Tyrin Truong has won with 56% of the vote, defeating incumbent Wendy O'Quin Perrette and “Teddy” Drummond.

See separate story on the Bogalusa Mayor and Council results

Parish School Board (District 7) – Lee Alan McCain (incumbent) failed by one vote to receive 50% of the vote and appears headed to a runoff with David “Big Dave” Pettit.

U. S. Senator – John Kennedy (incumbent) with 62% of the vote and 3935 of 3937 precincts reporting has defeated the other twelve candidates. This was a multi-parish race; in Washington Parish Kennedy received 68% of the vote.

U. S. Representative 5th Congressional District – Julia Letlow (incumbent) with 68% of the vote has defeated the other four candidates. This was a multi-parish race; in Washington Parish Letlow received 64% of the vote.