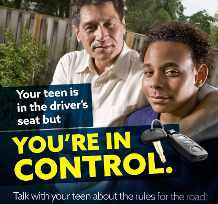 October 16-22, 2022 is National Teen Driver Safety Week. Louisiana State Police, the Louisiana Highway Safety Commission, and the National Highway Traffic Safety Administration (NHTSA) are encouraging parents to take the opportunity this week to talk with their teens about safe driving habits before handing over the keys.

Parents play a critical role in teen driver safety by communicating important driving safety information. New teen drivers are still gaining experience behind the wheel. This can increase the chances of the teen driver being in dangerous situations with other roadway users around them. It’s important for parents to have these discussions to avoid deadly driving behaviors such as alcohol and other drug use, lack of seat belt use, distracted driving, speeding, or driving with passengers. Use these tips below to get the conversation started:

1. Impaired Driving: All teens are too young to legally buy, possess, or consume alcohol. In 2021, nine teen drivers involved in fatal crashes and 113 involved in injury crashes in Louisiana had alcohol in their system. Alcohol isn’t the only substance that can keep teens from driving safely: marijuana and other drugs affect a driver’s ability to react to their surroundings. Driving is a complex task and drugs slow your reaction time. Remind teens that driving under the influence of any impairing substance, including illicit or prescription drugs, can have deadly consequences. If you feel different, you drive differently.

2. Seat Belt Safety: Wearing a seat belt is another way teens can stay safer in a vehicle. Unfortunately, too many teens aren’t buckling up. In 2021, over 70% of teen occupants involved in fatal crashes in Louisiana were unbuckled. Teen drivers and passengers are more likely to die in a crash if they are unbuckled. Encourage teens to stand strong and confirm everyone is buckled up, including front seat and back seat passengers no matter the time of day or distance of the journey, before the vehicle moves.

4. Speed Limits: Speeding can increase your chances of being severely injured or killed in a crash, increase your chances of losing control, reduce your ability to react to or avoid a roadway hazard, and extend the distance necessary to stop a vehicle. Nationwide in 2020, almost one-third (31%) of all teen drivers involved in fatal crashes were speeding at the time of the crash. Remind teens to always drive within the speed limit.

5. Passengers: Passengers in a teen’s vehicle can lead to disastrous consequences. Research has shown the risk of a fatal crash dramatically increases as the number of passengers in a vehicle also increases. The likelihood that a teen driver will engage in risky behavior triples when multiple passengers are in the same vehicle. As part of Louisiana’s Graduated Driver’s License (GDL) law, a 16-year-old driver may not transport more than one passenger under the age of 21 between the hours of 6:00 p.m. and 5:00 a.m. unless the passenger is an immediate family member.

By having these conversations, parents can help teen drivers avoid risky driving behaviors. Teens also need to understand the rules and know the restrictions outlined in Louisiana’s GDL law (https://lern.la.gov/wp-content/uploads/GDL-Chart.pdf).

While many teens will learn much of this content in driver education, it’s through parent conversations that the lessons are driven home and rules are enforced. Parents should set rules before handing over the car keys and start the conversation about safe driving during National Teen Driver Safety Week.