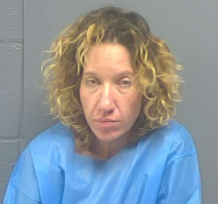 Tangipahoa Parish Sheriff's Office Chief Jimmy Travis reports the death of 39 year-old Julius White  of Kentwood and that White was shot and killed during a disturbance between he and his ex-girlfriend, 33 year-old Hannah Pittman.

On July 24, 2022, deputies responded to a residence on Cecil P Road in Kentwood for a disturbance where shots had been fired. Deputies located Julius White laying at the back door of the residence with a gunshot wound to the shoulder. After extensive life-saving measures were taken by medical personnel, White succumbed to his injuries.

It was learned during the investigation that Pittman shot White during an argument. Pittman had remained on-scene and fully cooperated throughout the investigation. Pittman was taken into custody and booked into the Tangipahoa Parish Jail on one count of Negligent Homicide and one count of Convicted Felon in Possession of a Firearm.

All persons accused of a crime are innocent until proven guilty.