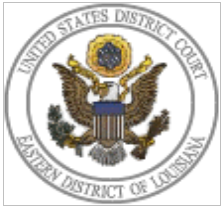 U.S. Attorney Duane A. Evans announced today (May 24, 2022) that Sloane Signal-Debose, age 51 and a resident of Slidell, was charged on May 23, 2022 with misappropriating funds from a veteran while Signal was the veteran’s fiduciary.

According to the bill of information, from 2016 until 2018 Signal was a fiduciary for a veteran who needed assistance with the management of his affairs, and she had control over the veteran’s finances and bank accounts. During that time, Signal took over $100,000 from the veteran’s accounts and used it as the down payment on a home for Signal that was only in Signal's name. Signal also used additional funds from the veteran to pay contractors working on Signal’s home. Signal then submitted false records to the Department of Veteran’s Affairs to hide her misuse of the veteran’s funds.

U.S. Attorney Evans reiterated that a bill of information is merely a charge and that the guilt of the defendant must be proven beyond a reasonable doubt.

If convicted, Signal faces up to five years in prison, up to three years of supervised release after release from prison, a fine of up to $250,000 or twice the gross gain to Signal or the gross loss to any victims, and a mandatory $100 special assessment fee.

U.S. Attorney Evans praised the work of the Department of Veterans Affairs Office of Inspector General. Assistant United States Attorney Nicholas D. Moses is in charge of the prosecution.