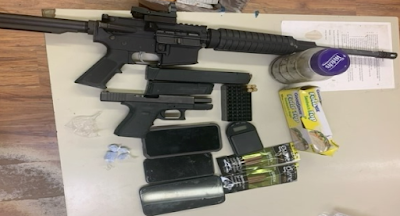 As the vehicle stopped, a passenger of the vehicle, later identified as 21 year-old Darrell Fisher, fled from the vehicle carrying what appeared to be an AR style rifle. The remaining occupants were detained as deputies gave chase to Fisher. As deputies were pursuing Fisher on foot, he was observed throwing the rifle before forcing his way into a neighboring residence where he was quickly apprehend.

A subsequent search of the vehicle revealed a loaded Glock pistol with extend style magazine, approximately a quarter ounce of suspected methamphetamine, and approximately one quarter pound of suspected marijuana. While conducting a criminal records check on the driver, 20 year-old Larry Robinson, and the remaining passenger, 24 year-old Anthony Knight, it was discovered both subjects were not allowed to possess firearms due to them being convicted felons. It was also discovered Knight was wanted by Pike County, MS for failing to appear in court for a weapon related charge.

The three subjects were charged with numerous weapon, narcotics, and other offenses.

**Note - All persons accused of any crimes are to be considered innocent until proven guilty in a court of law.