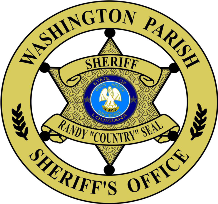 As reported yesterday (February 3, 2022), early Thursday afternoon, Washington Parish Sheriff’s Office corrections deputies and the jail’s registered nurse responded to a medical emergency in one of the male housing units. Brandon Christopher Williams, age 31 and a resident of Columbia Way in Bogalusa, was treated on the scene and then transported to Riverside Medical Center. He was pronounced dead at the hospital.

Sheriff Randy Seal asked both the Louisiana State Police and the Sheriff’s Office Criminal Investigative Division to respond immediately and begin an investigation. After an investigation which lasted late into Thursday night and then continued Friday morning and early afternoon, investigators obtained arrest warrants for the following:

The preliminary investigation revealed that Slocum, who was transferred to Washington Parish on February 1, 2022 from the Pike County, Mississippi Jail, had narcotics concealed inside his body when he was brought to Louisiana. He was able to recover those narcotics while inside the Washington Parish Jail. He consumed some and gave some to Cameron Seal and Brandon Williams who also consumed the narcotics. All three were affected by the narcotics which led to Williams’ death.

Williams had been in the Washington Parish Jail since July 28, 2021, awaiting trial on charges of home invasion, kidnapping, domestic abuse battery, domestic abuse battery strangulation and theft. He has two previous arrests. In 2008, he was arrested and charged with six counts of armed robbery. In 2021, he was charged with possession of illegal drugs and resisting an officer. While jailed on current charges, he was arrested again for causing a fire in his housing unit.

Slocum, who had been in jail for two days, was awaiting trial on charges of unauthorized use of a motor vehicle and contempt of court. He now must face trial on the second degree murder charge.

Seal has been in the Washington Parish Jail since January 31, 2022 for contempt of court. He has four previous jail stays in Washington Parish. In late 2017, he was arrested for reckless operation of a motor vehicle and having no driver’s license. In 2018, he faced charges of careless operation of a motor vehicle, leaving the scene of an accident, having no driver’s license, public intimidation and possession of marijuana. He was arrested in 2019 for contempt of court. He was charged with multiple offenses in late 2021, including three counts of contempt of court, aggravated flight from an officer, and having switched license plates and improper equipment on his vehicle. He now must face trial on the additional charge of principal to second degree murder which is a charge associated with assisting another person in the commission of a crime.

While the preliminary investigation has concluded, the investigation continues and there is a possibility other persons may be charged. Investigators are awaiting the results of an autopsy on the body of Williams.

“This is a serious matter and these are very serious charges for Slocum and Seal,” stated Sheriff Randy Seal. “The investigators began their investigation immediately after Williams’ death and were able to reach conclusions and make arrests within twenty-four hours. That is remarkable. I commend our responding jail deputies and nurse, all of our fine detectives and Louisiana State Police detectives for an outstanding job. Yes, Williams was an inmate, but he also was a human being, and no person should have to die under such circumstances.

Some may ask why the narcotics were not discovered on Slocum when he was booked into our jail. While we may legally search inmates, we are forbidden by the federal courts to conduct body cavity searches except under very special circumstances and with an order from a court.”