Traffic Stop Results in Two Arrested / 1.7# of Meth and 1/2# of Cocaine Found 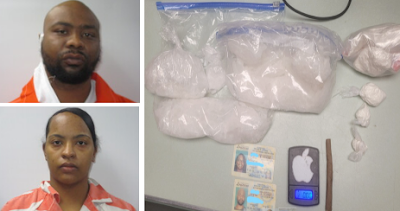 Kelvin Coshune Warren, age 29 and  a resident of Pearlie Causey Road, and Portia N. Allen, age 33 and a resident of 20th Avenue in Franklinton, were arrested today (January 28, 2022) on Highway 430 after being found in possession cocaine and methamphetamine.

After a traffic stop and search of Allen’s vehicle, officers discovered 1.7 pounds of methamphetamine and almost a half-pound of cocaine stored inside a plastic bag concealed in a handbag on the passenger side floor board.

Allen was booked into the jail two counts of possession of illegal drugs with intent to distribute and a traffic offense in addition to an outstanding warrant for a contempt of court. There is no record of previous arrests for Allen.

“Wow! That’s a lot of dope,” stated Sheriff Randy Seal. “And why are illegal drugs referred to as dope? I think we all know the answer to that. I am so pleased with the proactive work of our officers in locating the illegal methamphetamine and cocaine and removing it from our community.”