Franklinton Mayor and Board of Aldermen Meeting on December 14, 2021 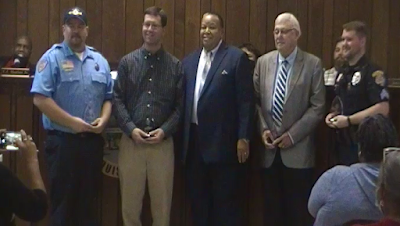 At the Franklinton Mayor and Board of Aldermen meeting on Tuesday (December 14, 2021, Mayor Greg Route began by recognizing Employees of the Year in each department. (Beginning at 3:20 into the video). Those so recognized were Sgt. Jared Stubbs (Police Department), Cody Brumfield (Fire Department), Justin Barber (Maintenance Department), and Danny Knight (Administrative Department).

Residents Frankie Crosby and Misty Bickham were on the Agenda to address the Mayor and Board. Resident Frankie Crosby addressed the Mayor and Board regarding community cleanup day and. after discussion, the date was scheduled for April 30, 2022. Crosby was also on the Agenda to speak on the topic of transparency. His comments were primarily in regard to police officers (Beginning at 12:55 into the video). Resident Misty Bickham addressed the Mayor and Board objecting to a conversation Alderman Spears had with her mother (beginning at 21:00 into the video).

Following Aldermen comments that began at 1:09:45 into the video, Mayor Route reviewed the challenges and accomplishments in 2021 (beginning at 1:15:55 into the video).