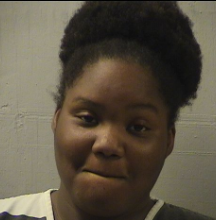 Due to injuries sustained by the attack, the teacher had to seek medical attention at a local hospital.

Larrianna Jackson was arrested and charged with Battery of School Teacher (Felony). Jackson was then transported to St Tammany Parish Jail. Bond was set at $25,000.00.

Officers on scene were also provided a video that captured the entire incident. The video shows the schoolteacher sitting at her desk where she appears to be talking to Larrianna Jackson. After a moment, Jackson punches the teacher, causing the teacher to fall to the ground. As the teacher fell to the ground, Jackson continues to violently closed fist punch the teacher. The video then turns off at this point.

Officers learned that this violent attack by Jackson, may have been prompted by a viral social media application known as Tik-Tok. Evidently users on the app have deemed it to be a challenge to damage school property and attack teachers.

The Covington Police Department would like to remind everyone that anyone who participates in such a challenge will be booked accordingly.

This matter is still under investigation and more arrests may be forthcoming.