Two Arrested on Drug and Gun Charges in Franklinton

On Tuesday (June 15, 2021), Washington Parish Sheriff’s Office deputies, along with officers from the Franklinton Police Department, were dispatched to a Franklinton residence to check on the welfare of a female who reportedly had been involved in a disturbance. Arriving at the Delta Lane residence, officers initially encountered 46 year-old Dayon Deleco Dyson, who had been in an argument with his girlfriend.

When officers entered the residence to check on the well-being of the female, they noticed a strong odor of marijuana plus a rifle. Deputies also encountered 23 year-old  Jaylen J. Magee, in an adjacent room, who was in possession of 234 grams of marijuana. In the same room, officers discovered a loaded 9mm pistol. Both Dyson and Magee were arrested. 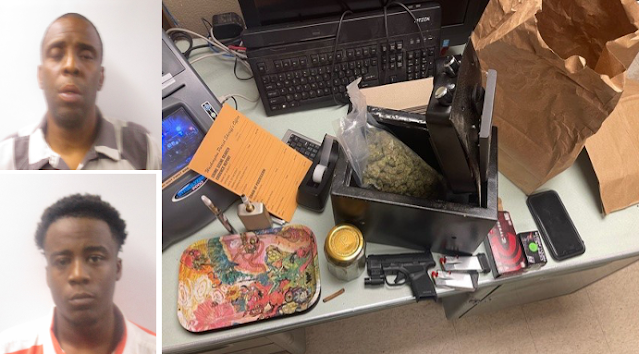 Dyson was booked into the Washington Parish Jail on charges of domestic abuse battery and being a convicted felon in possession of a firearm. He has a history of arrests in Washington Parish since 2014 that includes arrests for outstanding warrants, numerous counts of failure to appear, four counts of failure to honor a written promise, DWI, possession of illegal drugs with intent to distribute, possession of marijuana, several traffic offenses, and battery of a dating partner.

“Officers never know what they will encounter when they respond to a call,” stated Sheriff Randy Seal. “In this case, a check on the safety of a female resulted in the arrest of two felons and confiscation of illegal drugs. I am so pleased with the work of our deputies and the Franklinton officers in this matter. Good work, men!”