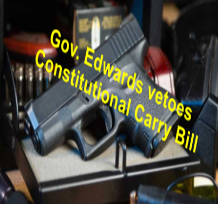 Today (June 25, 2021), Gov. John Bel Edwards issued a statement on Senate Bill 118, which he vetoed on Thursday evening. The Senate approved it 27-9 and the House 73-28. The Bill would have allowed "permitless" concealed carry, also known as constitutional carry, of a firearm by a Louisiana resident – provided the Louisiana resident was in compliance with other provisions of the Bill, such as: completion of a 60-minute online education course, not under the influence of alcohol as evidenced by a BAC of .05%, not under the influence of a controlled dangerous substance as evidenced by blood or urine tests, and not prohibited by the provisions of R.S. 14:95.

Gov. Edwards said: “I am a strong supporter of the Second Amendment, and an enthusiastic outdoorsman and hunter. But I simply cannot support carrying a concealed carry firearm without proper education and safety training – and I believe the majority of Louisianans agree with me. Our current system strikes the right balance of ensuring that people can bear arms while also keeping reasonable permitting and training processes in place. It is a matter of basic public safety and numerous law enforcement leaders across the state opposed the bill for this reason, especially as it relates to the enhanced risk posed to their officers. Simply put, it is not too much to ask that a person who wishes to carry a concealed weapon in public be required to attend basic marksmanship and safety training so they understand the regulations associated with such an action. That’s reasonable and responsible, and for these reasons, I have vetoed the permitless carry bill.”

This veto gives impetus to the movement to hold what would be the state’s first veto override session.