The Hammond Police Department reported today (June 25, 2021) that on Wednesday (June 23, 2021), detectives with the HPD Narcotics Unit began investigating a report that a large amount of narcotics was en route to the Hammond Northshore Regional Airport from California, with the final destination in Miami, Florida.

HPD detectives, along with the U.S. Department of Homeland Security and U.S. Customs Air and Marine Division, went to the airport and conducted surveillance. At approximately 5:00 pm, a Learjet 55 landed and was attempting to purchase fuel. The pilot gave detectives permission to search the aircraft. During the search, detectives located six large canvas duffle bags and six large suitcases all containing suspected marijuana, marijuana vape cartridges and pre-rolled marijuana cigars. The street value of the items seized is approximately $750,000. 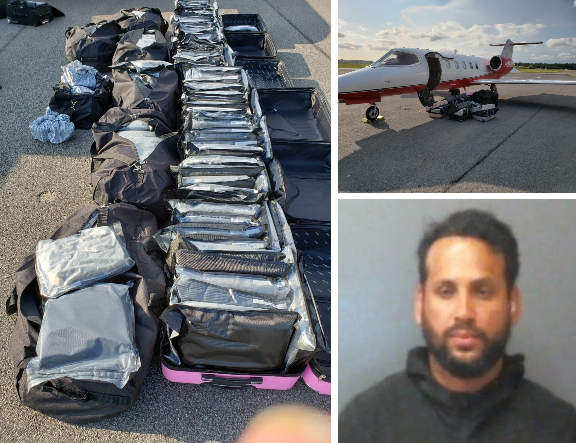 Three suspects were detained and interviewed. The two pilots were released, and the passenger, Leonard Lopez, 40 years old from Miami, Florida, was arrested.

The aircraft, a LearJet 55, was seized and is pending forfeiture through the 21st Judicial District Attorney’s Office. The total amount of seized items is over $1.6 million.