Pair Went on Shopping Spree in Bogalusa But Forgot to Pay 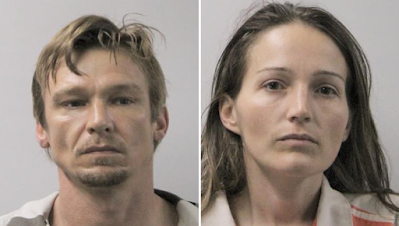 The Bogalusa Police Department reports that on February 20, 2021, a male and a female subject went on a shoplifting spree at the Bogalusa Wal-Mart. The two subjects made three trips to Wal-Mart that day, reportedly stealing multiple items valued at over $1,000.00. On February 23, 2021, Wal-Mart Asset Protection discovered the thefts on store surveillance video and notified police.

Bogalusa Police Department Detectives began an investigation and obtained video footage and still photos of the subjects. On March 1, 2021, after being unable to identify the subjects, photos of both subjects and their vehicle were posted on the Bogalusa Police Department Facebook page. Within a short period of time, multiple calls were received identifying the two subjects as Roger Dale Collier, Jr.(41) and Sarah Ashley Adams Collier (32). Detectives were able to verify the identity of the Colliers through various public records, and arrest warrants were obtained for both for Theft between $1,000.00 to $5000.00. Washington Parish Sheriffs Office Detectives were notified of the arrest warrants, due to the Colliers living outside of Bogalusa.

On March 3, 2021, a W.P.S.O. Detective observed the Colliers leaving their residence and stopped them, arresting them as fugitives from the Bogalusa Police Department and Bogalusa Detectives later arrested the Colliers at the Washington Parish Jail on the Theft warrants.

BPD says, "Although this was not a violent crime, it is an example of how crimes can be solved when the public and police work together. This crime was quickly solved due to tips from multiple citizens, and we extend our thanks to each one who called. We hope that this trend continues and together we can build a safer community."