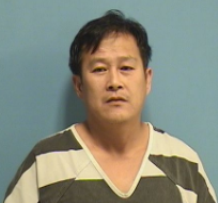 The St. Tammany Parish Sheriff’s Office has arrested Hien Ho, age 48 and of Ponchatoula, on nine counts of Simple Burglary and one count of Attempted Simple Burglary. Over the past few months, Ho targeted small businesses throughout St. Tammany Parish. He made forced entry through the front glass of these businesses, and stole currency from the store registers.  In most cases, he utilized a slingshot to penetrate the businesses’ front glass in order to gain entry.

During the investigation, it was discovered that several other surrounding agencies were investigating the same type of business burglaries within their jurisdictions. Investigators were able to link cases in St. Tammany to the same black, 2017 F-150 truck that was being used in connection with crimes in other jurisdictions. Through physical evidence and surveillance footage, authorities were able to identify Ho as the suspect.

Several additional charges will be forthcoming from surrounding agencies, including Jefferson Parish, Tangipahoa Parish and municipalities on the Northshore.

“Solving this case was truly a cooperative effort of several entities working together and sharing information and resources,” Sheriff Randy Smith said.