On Wednesday evening (January 8, 2020), the Bogalusa Police Department responded to a complaint 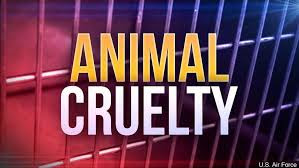 of a dog being tied up with its mouth taped shut at a residence in Bogalusa. The responding officer found the dog under the carport with a chain attached to its collar and wearing a muzzle that was duct-taped tighter than normal. The dog had no access to food or water. The dog did not show any signs of injury.

A representative with the ASPCA, who had  also responded, took possession of the dog. The homeowner was not at home but was contacted and came to the Bogalusa Police Department. The homeowner told the officer that she put the muzzle on the dog due to complaints from the neighbors of the dog's excessive barking and to ensure it didn't bite anyone.

The homeowner was initially charged with Simple Cruelty to an Animal. After further consultation with Police Administration and the City Prosecutor, the officer determined that probable cause existed to upgrade the charge. The officer then sought and obtained an arrest warrant for the dog's owner for Aggravated Cruelty to an Animal. The dog's owner will be arrested and the case will be submitted to the District Attorney for consideration for prosecution.

The Bogalusa Police Department stated it “condemns the actions of the offender in this matter, and in any matter in which an animal is abused. We will aggressively pursue charges, based on Louisiana Law, against any person who mistreats or abuses an animal.”