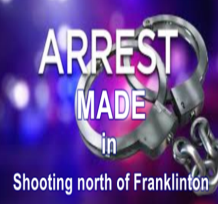 Tyshon Zicuriun Brumfield, age 20 and a Franklinton resident, was arrested on January 13, 2023 and charged with two counts of aggravated assault with a firearm and one count of illegal discharge of a firearm. The arrest occurred after the Franklinton Police Department intercepted Brumfield who had fled from the scene of the shooting on Highway 430.

Investigation by a Washington Parish Sheriff’s Office detective indicated Brumfield approached a group of people on January 12, pointed a firearm in their direction and fired one time. He then fled.

Bystanders were able to give a description of Brumfield and the vehicle he was driving. When the Franklinton Police Department spotted him on 10th Avenue, they took him into custody and notified the Sheriff’s Office. Brumfield was transported to the Washington Parish Jail and his bond was set at $50,000.

“Thankfully, no one was injured,” stated Sheriff Randy Seal. “One simple decision to misuse a firearm created chaos in a situation which could have turned out much worse. I’m grateful it didn’t. Let this be a lesson. Use firearms carefully and never allow your emotions to control your actions. When that happens, jail is an inevitable destination. I am grateful to the fine officers of the Franklinton Police Department who assisted in Brumfield’s capture.”