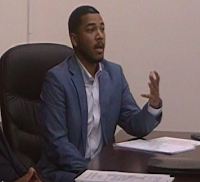 Ordinances approved were (see the video beginning at 3:45)

Residents addressed the Council during Public Participation (beginning at 18:25 into the video) on matters that included dilapidated buildings, recognizing efforts and achievements regarding civil rights, status of the methadone clinic issue (nothing to report at this time), the need to clean up the city, the need to repair streets, the need for a trash bin at Ponemah Cemetery, and issues of asbestos in buildings.

During Administrative Remarks (beginning at 42:10 into the video), Mayor Truong referred to ethics problems he will be addressing soon, spoke of recent shootings and efforts he is making to STOP THE VIOLENCE (to include curfews, crime cameras, and a request he will be making to the Governor for manpower from State Police or National Guard). The Mayor nominated (and the Council approved) Chiletra Brown as Director of Administration and James Patterson as Director of Public Works.