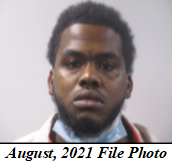 U.S. Attorney Duane A. Evans announced that Jerome Shaquille Wilson, aka “Rome,” age 27 and a resident of Bogalusa, Louisiana, was indicted by a federal grand jury on December 15, 2022 for being a felon in possession of a firearm. Federal law prohibits individuals who have been convicted of certain crimes from possessing firearms after being convicted.

U. S. Attorney Evans reiterated that the indictment is merely a charge and that the guilt of the defendant must be proven beyond a reasonable doubt.

In a separate matter, Wilson was identified by Bogalusa Police on November 4, 2022 as wanted for Obstruction of Justice in connection with the murder of Jerry Smith outside of Lumberjack stadium during a football game on October 14, 2022. Click here for that story