Hurricane Fiona will continue to impact the Turks and Caicos this morning. Tropical storm conditions are possible on Bermuda by late Thursday. Fiona is expected to affect Atlantic Canada as  powerful cyclone late Friday and Saturday.

A tropical wave is a couple hundred miles east of the southern Windward  Islands. The system is likely to become a tropical depression within the next couple of days. The disturbance is forecast to move west-northwestward across the southern Windward Islands today and then move toward the central Caribbean Sea later this week. Formation chance through 48 hours...high...70 percent and formation chance through 5 days...high...90 percent.

A tropical wave is located several hundred miles west-southwest of the Cabo Verde Islands.  Despite a dry environment, slow development of this system is possible over the next several days as it moves northwestward and then westward over the tropical Atlantic. Formation chance through 48 hours...low...20 percent and formation chance through 5 days...low...30 percent.

A tropical wave is forecast to move off the west coast of Africa on Thursday. Thereafter, environmental conditions are forecast to be conducive for some development, and a tropical depression could form this weekend while the system moves slowly northward, between west Africa and the Cabo Verde Islands. Formation chance through 48 hours...low...20 percent and formation chance through 5 days...medium...50 percent. 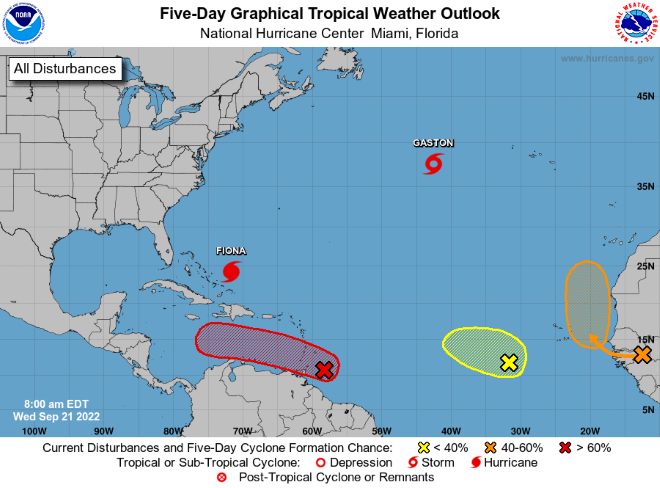