Disturbance 1. Hurricane Fiona - NO THREAT TO US

Hurricane Fiona is moving north-northwest over the southwest Atlantic Ocean. Heavy rainfall and life-threatening flash flooding will continue over the Dominican Republic today and impacts around the center of Fiona will impact the Turks and Caicos through the afternoon. Interests in Bermuda should continue to monitor the progress of Fiona.

Disturbance 2. Central Tropical Atlantic - KEEP AN EYE ON THIS ONE

A tropical wave is located several hundred miles east of the Windward Islands and moving westward at 15-20 mph. Gradual development of this system is forecast during the next several days as the system approaches the Windward Islands, and a tropical depression could form by the latter part of this week as the system moves into the eastern and central Caribbean sea. Formation chance through 48 hours...low...10 percent and formation chance through 5 days...medium...50 percent.

Disturbance 3. Central Subtropical Atlantic - NO THREAT TO US

An area of low pressure is located over the central subtropical Atlantic, about 950 miles west-southwest of the westernmost Azores.   Environmental conditions appear marginally favorable for additional development, and a tropical depression is likely to form within the next day or so before upper-level winds become less conducive later this week.  The system should move generally northward or northeastward while remaining over the open waters of central subtropical Atlantic. Formation chance through 48 hours...high...80 percent and formation chance through 5 days...high...80 percent. 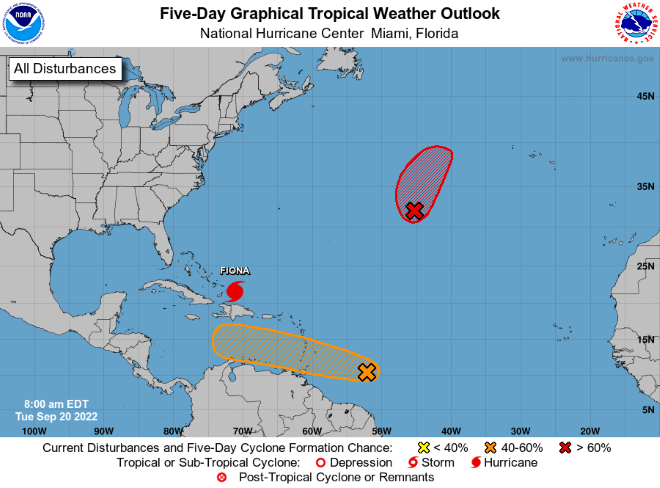