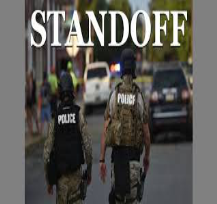 Quinton Richard, age 48 and of Abita Springs, is in custody following a nine-hour standoff that occurred Monday (September 12, 2022) night in an Abita Springs neighborhood.

Shortly before 5:15 p.m. Monday, St. Tammany Parish Sheriff’s deputies were called in to assist a local bail bondsman who was attempting to arrest Richard on a warrant. Richard pulled a gun on the bail bondsman before arming himself with multiple firearms and barricading himself inside his residence on Barque Place in Abita Springs.

At approximately 6:15 p.m., after Richard refused to exit the residence, the STPSO SWAT team was called in to assist. Members of the STPSO negotiations team were able to make contact with Richard but negotiations broke down and chemical munitions were introduced into the residence with little to no effect.

Early Tuesday (September 13, 2022) morning, SWAT team members, utilizing a camera system inside the residence, were able to observe Richard apparently fall asleep. They then made entry into the home and Richard was safely taken into custody without injury shortly after 2:30 a.m.

Richard was transported to the St. Tammany Parish Correctional Center, where he will be booked for Resisting Arrest, Aggravated Assault and three counts of Failure to Appear (Fourth Offense DWI, Aggravated Flight from an Officer and Speeding).

“We understand that many people were temporarily inconvenienced last night. We appreciate everyone’s cooperation and patience as we worked to ensure the safety of all residents,” Sheriff Randy Smith said. “As always, the safety of our residents is our top priority, and I am pleased the deputies on scene and the members of our SWAT team were able to take the suspect into custody safely and without any injury to him, any neighbors or our deputies.”