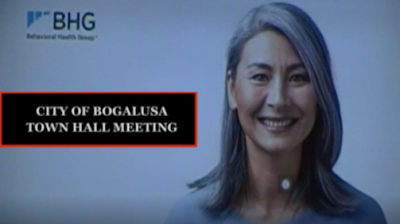 The two-hour meeting was attended by Mayor Perrette, members of the Bogalusa Council, Parish President Thomas, members of the Parish Council, Senator Mizell, Representative White, and other elected officials. Otherwise, less than a hundred from the public was in attendance.

Opposition, especially as to location, to the proposed OTP/Methadone Clinic has been voiced at recent Bogalusa Council meetings and on social media.  BHG Chief Development Officer Dwight Mussleman recognized and addressed the community's concerns, indicating that BHG would work with the City and community to be a good corporate citizen. At one point during the meeting, Mussleman responded to a question about the location. Musseleman indicated that abandoning the proposed location on Avenue B would not be financially feasible as it would cost BHG close to $750,000.

See the video for all that was said.