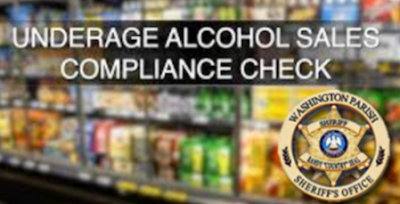 In August, the Washington Parish Sheriff’s Office conducted two operations in the Bogalusa area to identify businesses which might sell alcohol to underage persons. On August 12, fourteen businesses were visited and clerks at five of the establishments were cited for failing to check for age identification and selling alcohol to an underage person. Those five businesses were the Carolina Stop and Save, Highway 10 One Stop, JZ Quick Stop, Highway 10 Chevron and Jr. Food Mart.

Another underage drinking operation was conducted on August 31 at seventeen businesses in both Bogalusa and Franklinton. Clerks at none of those businesses were willing to sell alcohol to the underage buyer.

“In both operations, a total of twenty-six parish businesses refused to sell alcohol to an underage buyer,” stated Sheriff Randy Seal. “That is a credit to each business and each clerk working therein. I extend my thanks to all of them for following the law and keeping alcohol out of the hands of underage buyers. Hopefully, the five businesses which did not follow the law learned a valuable lesson on the importance of requiring identification for each person who attempts to purchase alcohol.”