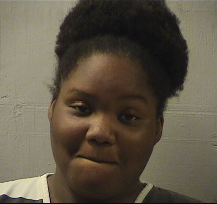 During Jackson’s guilty plea, the victim was present in court and gave a victim impact statement (see below) describing how her life has been altered by Jackson’s physical attack. After listening to the victim’s statement, Judge Richard Swartz imposed the following sentence on Jackson: five years as to each charge, all but one year suspended, with the one year in prison to be served in the Department of Corrections at hard labor without the benefit of probation or parole. The Judge also granted a lifetime protective order for the victim. Upon release from prison, Jackson will serve 3 years on supervisory probation with anger management classes and mental health counseling.

The Covington Police were called to Covington High School on October 6, 2021, due to a report of a battery of a school teacher by a student. The victim was taken to St. Tammany Parish Hospital.

While officers were obtaining information from the school principal, a fellow student informed them that a video had been uploaded to TikToc. The juvenile showed the video to the officers who reported that, “the [victim] and Jackson appear to be arguing, after which Jackson grabs [the victim] by the hair and begins punching her in her head. Jackson continues to beat the victim on her arms and head as she is pull to the ground.”

The defendant was interviewed that day at Covington High. She was wearing the same clothing and hairstyle as was on the video. The defendant denied that that any such incident occurred; she was arrested.

The victim sustained lacerations and bruises on both arms, trauma to the head with concussion, trauma to the neck, a fractured rib with heavy bruising and a sprained wrist. A chunk of hair was pulled from her head and she was diagnosed by her eye specialist as being “one step away from a detached retina.” Investigations never confirmed whether the “Slap a Teacher” TikTok Challenge was the motive behind the attack.

The case was prosecuted by Assistant District Attorney Zachary Popovich.

With the victim’s consent, the DA’s Office has attached to this release a copy of the victim’s impact statement. Click “Read More” below for the statement.

Thank you for this opportunity to share my thoughts regarding this horrible ordeal. Not only have I suffered through a violent attack, but also have continued to suffer physically and emotionally. I can no longer sleep at night, function normally, stay focused, or complete simple tasks. My memory has been severely affected with little improvement over the past year. My life has been negatively affected for the rest of my life. I no longer feel safe in my home or in my hometown where I grew up. The attacker, Jackson, is a potential danger to me and others in this community, especially the elderly. I fear for the safety of others unless her violence is stopped.

Since the brutal attack by Jackson on October 6, 2021, in the classroom at Covington High School, I have suffered great physical and mental pain. Many people have seen the video documentation of the savage attack. Jackson walked up and punched me in the face, knocking my glasses to the floor. She grabbed me by the back of my head, by my hair, and pulled me from my chair unto the floor. She continued to savagely pound my head with her fist as I screamed for help. The emergency room evaluated my injuries with an MRI, x-rays, and doctor examination. It was determined that the injuries included:

1. Trauma to the head with concussion

Jackson had also ripped out a huge portion of my hair by the roots as she held me down by my head as the beating continued. The day after the attack, I had a massive black bruise under my ribcage.

Other injuries and complications followed. I experienced memory loss, white flashes of light in my field of vision, and ringing in the ears. I was quickly referred to an eye specialist. (The initial visit and two follow-up visits were required.) His diagnosis was the attack caused me to be “one step away from a detached retina.” I saw two neurologists for the memory loss, an audiologist for the ringing in the ears, and a dermatologist for the loss of hair during the attack and the subsequent hair loss due to stress.

Shortly after the attack, my doctor recommended counseling which I began and still continue. I was afraid after the attack. I walked around my house carrying a loaded revolver, fearing more attacks from Jackson’s family or friends. I was afraid to answer my front door. I would go to the kitchen and look through the window to see who was parked in the driveway before opening the door. I couldn’t sleep at night and when I finally did sleep, from exhaustion, I had terrible nightmares. I had recurring dreams about being robbed, chased, beaten, or killed.

I also had recurring dreams about my purse being lost or stolen which the counselor interpreted as a loss of identity. My identity has been “stolen” as a result of the attack. The Tic-Tok challenge for the month of October, 2021, was for students to slap a teacher in the face. The crime must be videotaped and submitted in order to receive money. I am a very private person. This is the first time I have responded publicly to my horrific ordeal. In an effort to maintain my privacy I declined commenting to newspapers, television, and online sources.

Unfortunately, everybody knew my personal business because of the internet. The video was shown repeatedly on the local news stations. My face was not “blurred”. No one asked my permission before televising the attack over and over. My neighbor saw the news, called me, and said that she recognized me. Three days after the attack I found out that I had already been on Inside Edition. Weeks later I sought additional counseling through the teacher’s federation. I called the counselor and asked if he was from Louisiana or out-of-state. He lived in New York. I told him about my situation and he said, “Oh, yes, I read about it in the New York Times.”

I have been embarrassed, humiliated, and further victimized around the world by this unwanted attention. Jackson seems to revel in her notoriety. Her widely publicized criminal mug shots indicate a revolting degree of smugness. Jackson is unable to conceal her delight in her criminal actions. There is no remorse for her actions. Jackson and I have been in this courtroom and the courthouse seven times before today. There has been no expression of concern for me or my injuries or any attempt to apologize for her brutal behavior towards me.

Jackson has blatantly and arrogantly refused to offer even the simple words, “I’m sorry.” She is not sorry and does not seek forgiveness. She has chosen her path in life. She has turned her back on living in a civilized society. The St. Tammany Parish School System has repeatedly given her chances to start over in one school after another. Her hostile behavior is well documented and she is now terminated from this school system. However, I do not believe the criminal attitude and behavior will end.

Some may think Jackson has known personal misfortune that may contribute to her current criminal status. I agree. I also feel certain that most people have endured misfortune without resorting to violent criminal behavior. It is a very unique individual who does not know someone who has been bullied, violently attacked, raped, robbed, or murdered. Jackson’ s homelife may not be perfect, but then, whose is? I have been told by school officials that Jackson has a sister who is an excellent scholar who has never been in trouble. Jackson’s inappropriate behavior has caused them both to be ejected from one school after another. I feel sorry for the sister.

I also feel sorry for judges and juries who rarely know the truth, the whole truth, and nothing but the truth about any case. What an emotional struggle it must be to discern truth from lies. How can anyone really know the truth? In this case there is no doubt. There is absolutely no doubt. Jackson plotted the attack and convinced two classmates to become her accomplices. They agreed to videotape Jackson violently attack their teacher, an elderly handicapped teacher who needs a cane to walk. They stood by and ignored my screams for help as Jackson repeatedly beat me after pulling me to the ground. How can someone ignore screams for help and simply videotape the violation?

Due to this ruthless, pre-meditated, vicious attack I have not been able to resume my normal life. The repeated blows to my head caused tinnitus, the constant ringing in my ears, which prevents normal sleep. The loss of memory is noticeable after every conversation I have with anyone. Sadly, I have stopped going to church and avoid social interactions. I just don’t function properly anymore. The counselor continues to treat me for depression and post-traumatic stress disorder. I have so much anger, resentment, and frustration inside me that I can’t seem to handle.

I understand that everyone makes mistakes. Often, I have told students we all make mistakes. We will continue to make mistakes throughout our lives. It’s how we handle our mistakes that show our character. The Reverend Martin Luther King, Jr., once had a dream that people would be judged by their character. Now is the time for judging the character and unmistakable and undeniable criminal behavior of Jackson. Our judicial system states that a guilty verdict for the two charges against Jackson should be a maximum of eight years in prison for one, and ten years in prison for the other. I will not argue against the punishments determined by our judicial system. In my opinion, as the victim, I am concerned about the potential victims in Jackson’s path. There is nothing to suggest Jackson is sorry for her past offences or that her criminal behavior will be deterred in any way. I am concerned about possible victims in the future, especially the elderly or others who can easily become victims. Having said that, I think a degree of compassion can be shown with a judgement of five years in prison without benefit of probation or parole. I hope and pray the judge will show his support for the safety of teachers everywhere. I hope and pray the judge will show his support for the elderly citizens who are so easily victimized.