Tangipahoa Man Wanted for Simple Robbery of a Juvenile 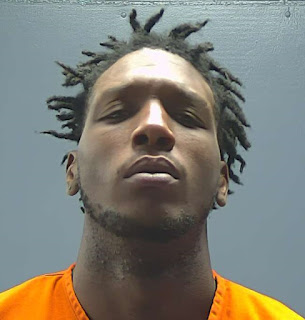 On Monday (August 22, 2022), Tangipahoa Parish Sheriff's Office deputies responded to Kentwood Brick on Highway 51 to reports of an employee being robbed. Deputies learned that Christopher Johnson, age 26 and a resident of the Village of Tangipahoa, robbed a 17 year-old co-worker while the two were in the restroom during a break.

According to witnesses, the victim exited a bathroom stall where he was approached by Johnson and several other employees. Johnson proceeded to remove the victim's cell phone from his pocket and told him he would give it back if the victim paid him $300. Meanwhile, another employee, later identified as Kevin Bates of Fluker, slapped the victim across the face. After the incident, Johnson left the brick plant for lunch and never returned.

Kevin Bates (age 49) was charged with Simple Battery of a Juvenile and released on a summons.

Christopher Johnson is wanted for Simple Robbery, along with other outstanding warrants issued prior to this incident, including Resisting an Officer and Armed Robbery with a Gun through the Independence Police Department.

TPSO Chief Jimmy Travis asks if anyone knows the whereabouts of Johnson to call the Sheriff's Office at 985-748-8147, or if you wish to remain anonymous, call Crime Stoppers of Tangipahoa’s anonymous tip line at 1.800.554.5245 or visit www.tangicrimestoppers.com and click on the P3 Tips icon or Submit A Tip! You may be eligible for a cash reward.

**All persons accused of a crime are innocent until proven guilty.