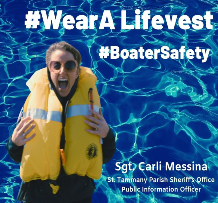 Shortly before 3:30 p.m. Monday (May 30, 2022), members of the St. Tammany Parish Sheriff’s  Marine Division were dispatched to Lake Pontchartrain in reference to a capsized boat.

The boat, a 31-foot twin inboard/outboard motorboat, was occupied by six adults when another boater observed it flip and begin sinking just west of the cabins at Fontainebleau State Park. Five of the occupants were rescued by other boaters prior to deputies’ arrival, but one occupant, who was not wearing a life vest at the time of the incident, was unaccounted for. Deputies with the Marine Division and the U. S. Coast Guard assisted Louisiana Wildlife and Fisheries as they searched the area of Lake Pontchartrain near Mandeville.

At approximately 7:00 p.m. Monday, the body of the missing boater was recovered in Lake Pontchartrain, just east of the Causeway bridge. The body has been turned over to the St. Tammany Parish Coroner's Office, who will make a positive identification  and a determination on cause of death.

“As we enter the active boating season, I urge everyone to please wear a life vest every time they are on a boat,” Sheriff Randy Smith said. “They  save lives.”