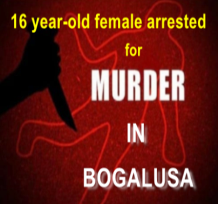 The Bogalusa Police Department reports the arrest of a 16 year-old female for the stabbing death of a 21 year-old that happened in Bogalusa on Thursday night (May 19, 2022).

Shortly before 9:00 pm , BPD officers responded to Myrtle Grove Apartments (formerly Oakhill) and found the victim, identified as 21 year-old Ne’Colby Thomas, suffering from a single stab wound to the chest. Patrol Officers and Fire Department personnel rendered first aid until the arrival of Northshore E.M.S. Thomas was treated on scene and transported to Our Lady of the Angels Hospital. Life saving measures were unsuccessful, and Thomas was pronounced deceased shortly after 10:00 pm.

Officers on scene quickly identified and detained a suspect, a 16 year-old female. Detectives interviewed witnesses and the suspect and determined that there was probable cause for the arrest of the juvenile on the charge of Second Degree Murder.

The name of the suspect will not be released at this time due to her age. She was remanded to the custody of a juvenile detention center pending a 72 hour hearing.

This investigation is ongoing and no further details will be released at this time.