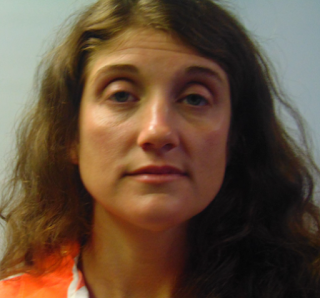 Last Friday (February 4, 2022), Tiffany Marie Knight-Martin, age 38 and a resident of Sam Thomas Road, was arrested by a Washington Parish Sheriff's Office deputy on domestic violence and numerous other charges.

The arrest stems from a January 27, 2022 incident when a Washington Parish Sheriff’s Office patrol deputy responded to a domestic violence complaint at a residence on Benny King Road. The deputy determined that Tiffany Marie Knight-Martin was the aggressor and was no longer at the scene of her crime. The investigation revealed that Knight-Martin had assaulted the male homeowner in the presence of two children and smashed property inside the house. When Knight-Martin fled the scene, she took the victim’s cell phone with her. The deputy noted the man had multiple lacerations on both arms. Failing to locate Knight-Martin at any of her known addresses, the deputy filed an affidavit with the 22nd Judicial Court asking for a warrant for her arrest. A 22nd Judicial Court judge issued the warrant.

Last Friday Knight-Martin was located at her mother’s residence by another deputy. When the deputy attempted to arrest her, she resisted and assaulted him with a large metal flashlight, causing injury to his hand. Knight-Martin was finally subdued after the deputy deployed his Taser. She was handcuffed, at which time the deputy discovered a quantity of marijuana in her jacket pocket. She was transported to the Washington Parish Jail and booked on charges of domestic abuse with child endangerment, aggravated assault upon a peace officer, battery on a police officer, resisting a police officer with force or violence and possession of marijuana.

This is not Knight-Martin’s first trip to the Washington Parish Jail. A review of jail records by the WPSO indicates numerous stays in the Washington Parish Jail since 2007 on charges that include 2 counts of aggravated assault, aggravated flight from an officer, criminal damage to property, aggravated criminal damage to property, 5 counts of possession of illegal drugs, 2 counts of criminal trespass, 2 counts of resisting an officer, 2 counts of resisting a law enforcement officer with force or violence, 2 counts of possession of drug paraphernalia, 2 counts of driving while intoxicated, contempt of court, unauthorized entry of an inhabited dwelling, introduction of contraband into a correctional facility, several traffic offenses, and on a felony fugitive warrant from the Mississippi Department of Corrections. Additionally, Knight-Martin was arrested on 2 occasions on warrants from the Louisiana Division of Probation and Parole and was remanded to the jail by the 22nd Judicial District Court  on 3 occasions.

“It would be an understatement to say this lady has personal issues,” stated Sheriff Randy Seal, “not the least of which is anger management. In addition to numerous charges in Washington Parish, she obviously has had arrests in Mississippi. Sooner or later, if she continues this reckless and out of control lifestyle, the outcome might be more disastrous than just another trip to jail. I pray that is not the case.”