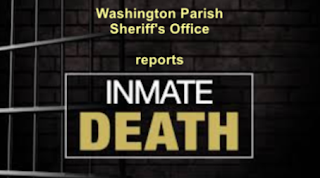 The Washington Parish Sheriff's Office has advised that, at approximately 2:00 p.m. today (February 3, 2022), WPSO corrections deputies and the jail’s registered nurse responded to a male inmate who appeared to be in medical distress. The inmate was removed from the housing unit, provided on-site medical care and transported to Riverside Medical Center by Northshore EMS personnel. He died while at the hospital. The body is now in the custody of the Washington Parish Coroner’s Office.

WPSO and Louisiana State Police investigators are on the scene conducting an investigation into the circumstances surrounding the inmate’s death. The preliminary investigation indicates that the deceased inmate, along with other inmates, possibly ingested a toxic substance. The other inmates have been medically cleared.

Due to the necessity to maintain the integrity of the investigation, no names or further details can be released at this time. The deceased inmate’s family has been notified.