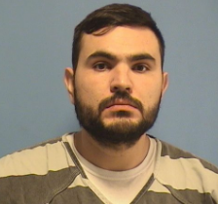 Ahmad Slyyeh, age 30 and a resident of Metairie and who owns a Slidell area business, turned himself into the St. Tammany Parish Correctional Center Wednesday night (February 2, 2022) and was booked on one count of Solicitation for Murder. Bond was set at $225,000.00.

St. Tammany Parish Sheriff’s Office Major Crimes Detectives conducted an investigation after receiving information that Slyyeh attempted to hire someone to murder his business partner. Slyyeh reportedly met an individual at the business and attempted to hire the person to murder his partner. That individual, however, came forward and notified the authorities and the potential victim. Detectives conducted an investigation, determined that Slyyeh committed the crime, and obtained an arrest warrant for Slyyeh.

“I am very proud of the hard work of our deputies and detectives! They work very hard to keep everyone safe and to solve any and all crimes,” Sheriff Smith stated. “This particular incident could have ended with someone getting hurt, but instead everyone is safe and the perpetrator is in custody.”