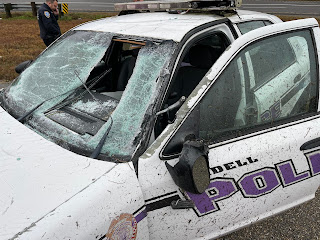 Around 9:15am this morning, a Slidell Police officer, responding to a call for service, was involved in
a single car accident on Interstate 10, right before the I-10, I-59, and I-12 split.

While switching lanes, the officer lost control of his police unit and hit the guard rail, causing the police car to flip over. The weather conditions at the time (heavy rain) is noted to be a contributing factor in the crash.

The officer was transported to a nearby hospital and thankfully suffered only minor injuries. No other vehicles were involved in the crash.

The officer stated he was very grateful for the fact he was wearing his seat belt and that it quite possibly saved his life.