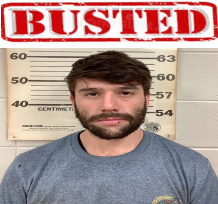 Draven Eubanks was taken into custody and charged with Aggravated Trafficking and Trespassing. All suspects are innocent until proven guilty in a court of law.