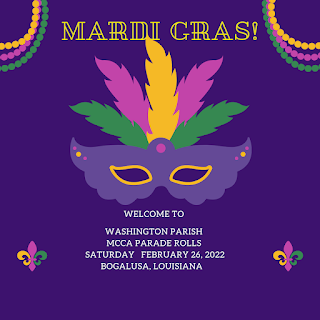 Parade rules are as follows:

1.  Vehicles cannot park along the MCCA parade route earlier than 72 hours before and 12 hours after a parade. The marking of city right of way is also not permitted within 72 hours.

2.  You cannot sell anything along the parade route without a proper rolling vendor permit. Contact the permit office at 985-732-6211.

3.  Do not throw objects or interfere with participants in the parade.

4.  Rowdy/obnoxious behavior, fighting, and nudity will not be tolerated. This includes profanity or loud music with profanity.

5.  Underage drinking (alcohol) will not be tolerated.

6.  Animals are not allowed within 150 feet of the parade route.

There will be several uniformed and non-uniformed officers along the parade route looking for violations. The goal is to ensure a safe and fun Mardi Gras for everyone!