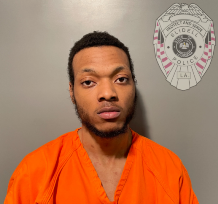 Slidell Police report that two men, driving through Slidell, were involved in a mid-day argument resulting in the driver shooting the passenger in the head. Miraculously, the bullet only grazed the victim’s head causing a moderate, non-life threatening injury.

Around 1:20 PM on Friday (January 28, 2022) afternoon, Slidell Police responded to a report of a shooting at the intersection of Warren St. and Seventh St. When officers arrived, they located a wrecked Infinity sedan, along with a man suffering from a graze wound to the head. The suspect, later identified as 21-year-old, Tre’von Early of New Orleans, fled the scene, but was later apprehended several blocks away. No one else was injured during the incident.

Tre’von Early is being held at the Slidell City Jail with an Attempted Second-Degree Murder charge and will later be transferred to the St. Tammany Parish Jail. The investigation is on-going.