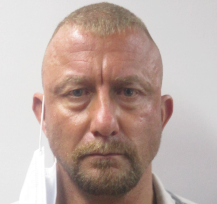 On Thursday (November 18, 2021), Michael David Branch, age 43 and a resident of Highway 436, was arrested and placed in the Washington Parish Jail charged with thirty-two felony offenses. Branch was booked on domestic abuse battery with strangulation, domestic abuse child endangerment, domestic abuse of a dating partner, possession of illegal drugs, possession of drug paraphernalia, contempt of court and twenty-six counts of possession of a firearm by a person convicted of domestic violence.

The arrest came after a Washington Parish Sheriff’s Office patrol deputy responded to Our Lady of Angels Hospital in reference to a victim who was receiving medical treatment for injuries suffered during an act of domestic abuse. The victim, who sustained injuries after being attacked by Branch while her child was present, was discharged from the hospital after being treated by medical personnel. Branch was arrested after deputies and detectives went to Branch’s home with a signed search warrant. It was at that time numerous firearms and a quantity of drugs were discovered in Branch’s house.

In July 2020, Branch was once again arrested and charged with battery of a dating partner and criminal damage to property. He faced more charges in November 2020 when he was arrested and charged with felony battery of a dating partner, violation of a protective order, theft and five counts of bond surrender. He remained in jail for eleven days before posting bond for his release. He plead guilty to the domestic violence charge and was given a six month suspended sentence and two years of supervised probation.”

“Branch’s record of violence against women speaks for itself,” stated Sheriff Randy Seal. “He displays a flagrant disregard for women and for the law itself. I firmly believe the District Attorney’s Office will vigorously prosecute him on these latest charges and do all within its power to make certain he receives time behind bars.”