Slidell Man Charged With Firing Into a Crowd 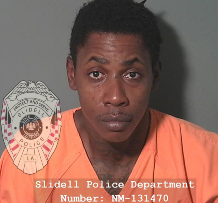 A two-year-old narrowly missed being shot Wednesday (November 17, 2021) evening, after a man fired multiple bullets into a crowd of people standing outside of a small apartment building in Slidell.

Slidell Police arrested 35-year-old Kevin Roberts on Thursday (November 18, 2021) morning, and charged him with six (6) counts of Attempted First Degree Murder and one (1) count of Felon in Possession of a Firearm.

Around 10:40pm on Wednesday, Slidell Police responded to the intersection of Cleveland Avenue and Eighth Street, after receiving reports of gunfire in the area. When officers arrived, they discovered six frantic victims outside of a small apartment building. One man was suffering from a gunshot to his leg, but the others were miraculously unharmed. One of the six innocent bystanders was a 2-year-old child.

Slidell Police Chief Randy Fandal says, “This type of ignorance and disregard for human life is unacceptable and will not be tolerated in our community. I'm proud to say that a swift investigation by our detectives got this dangerous man off our streets and in jail where he belongs. As your chief, I am committed to seeking the longest possible jail sentence for these violent criminals.”

The gunshot victim is expected to make a full recovery. The alleged motive for the shooting stemmed from a disagreement earlier the same day. Roberts was booked into the Slidell City Jail and has since been transferred to the St. Tammany Parish Jail.