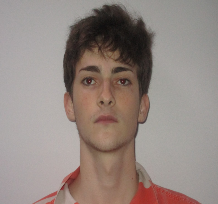 On November 21, 2021, a Washington Parish Sheriff’s Office patrol deputy responded to the Bogue Chitto State Park after receiving a complaint that an impaired person was creating a disturbance. When the deputy responded to the park, he encountered 18 year-old Noah Gabriel Burrows, who gave his address as Silver Springs, Maryland.

Burrows, who was at the park with another man, was speaking unintelligibly and hindering the public’s access to the park. The other man advised that he and Burrows had been consuming mushrooms. Northshore EMS arrived at the scene and attempted to assess Burrows who would not cooperate. At this time, the deputy placed handcuffs on Burrows and, with the assistance of a park ranger, attempted to place Burrows in the ambulance. During the process, Burrows licked the deputy on the forearm and continued to resist. He was then placed in the patrol vehicle for transport to the Washington Parish Jail.

At the jail, Burrows was booked on charges of disturbing the peace and assault on a police officer. During the booking process, he continued to resist by grabbing jail deputies. His friend, who was also impaired, was transported to the Sheriff’s Office to await someone to pick him up.

“This was a bizarre situation,” stated Sheriff Randy Seal. “While it is not uncommon to encounter persons under the influence of drugs, it is unusual to find someone who confesses to consuming mushrooms. This is a good example of the danger of ingesting any type of foreign substance whether orally or by smoking or injection. The use of any sort of mind-altering substance never leads to a good outcome.”