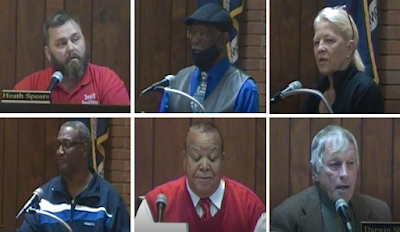 The Franklinton Mayor and Board of Aldermen met Tuesday (November 9, 2021) evening and the highlight was recognition of Veterans. Click here to view that portion of the meeting

Resident Frankie Crosby was on the Agenda to speak concerning speed limits in residential areas. After  addressing issues of speeding on streets in residential areas, Crosby began to speak on another issue  (beginning at 18:20 into video of the meeting). Crosby was interrupted and advised that he could speak during Public Participation on the additional issues he wanted to speak about. During public participation, Crosby began with an attack on Alderman Heath Spears (beginning at 36:30). Alderman spears was prevented from responding until later and he did. (See video at 44:05 through 51:20 and also beginning at 54:10)

Other residents spoke during Public Participation on issues of concern.