Disturbance 1. DOES NOT APPEAR TO BE A THREAT TO US NOW, BUT KEEP AN EYE ON THIS ONE. The disturbance over the central and eastern Gulf of Mexico is expected to move northeastward over the northeastern Gulf of Mexico later today. Conditions could become slightly more favorable to support some tropical or subtropical development as the system nears the northern Gulf coast tonight or early Thursday.  The disturbance is then expected to cross the southeastern United States, and some additional development will be possible after it emerges off the southeastern United States coast late this week. Formation chance through 48 hours is at 50% and formation chance through 5 is also at 50%.

Disturbance 2. NOT A THREAT TO US. Hurricane Larry is a large storm with significant swells threatening east coast of the United States and Atlantic Canada today through the end of the week. Larry is forecast to pass easst of Bermuda on Thursday bringing tropical storm conditions.

Disturbance 3. A tropical wave is expected to emerge off of the western coast of Africa in a few days.  Some development of this system is possible thereafter as it moves west-northwestward over the far eastern Atlantic. Formation chance through 48 hours is near 0% and formation chance through 5 days is at 20%. 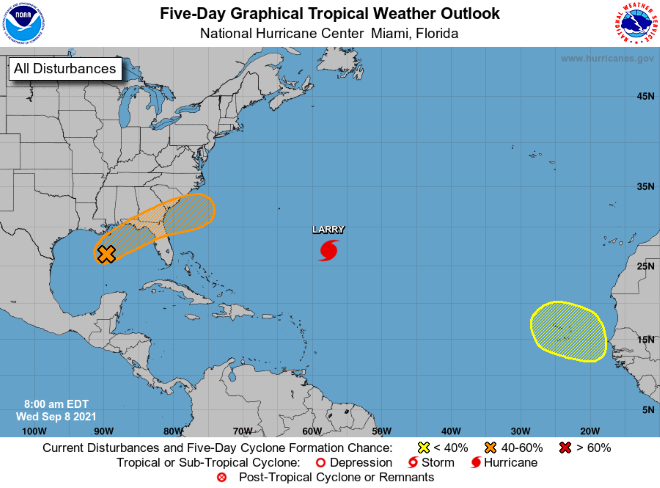