Disturbance 1. A surface trough over portions of Central America and the southern Yucatan Peninsula of Mexico is expected to move northwestward during the next day or so and then emerge over the southwestern or south-central Gulf of Mexico on Sunday. The system is forecast to then move northward or northeastward over the central Gulf of Mexico through the middle of next week. Unfavorable upper-level winds are expected to limit development through Monday, but environmental conditions could become marginally favorable for some gradual development on Tuesday or Wednesday. Formation chance through 48 hours is near 0% and formation chance through 5 days is at 30%.

Disturbance 2. Hurricane Larry is a major hurricane with winds over 110 mph but only a threat to Bermuda as it heads west-northwest. Larry is likely to cause life-threatening surf and rip current conditions on the eastern U.S. coastline after Labor Day. 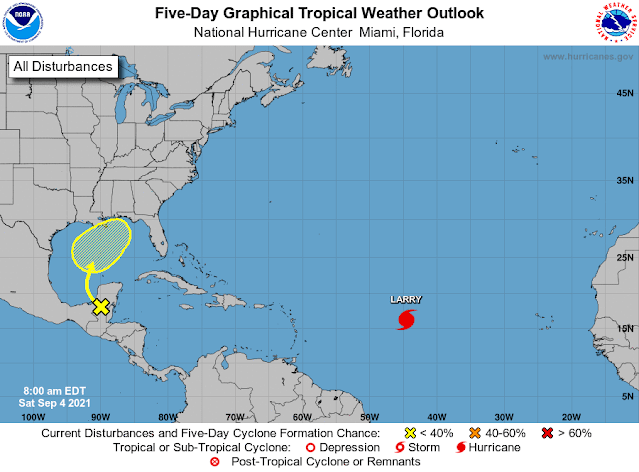