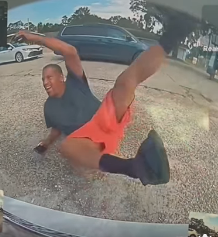 On Friday (September 3, 2021), Slidell Police arrested 47 year-old Arthur Bates, Jr. for falsifying a police report, after he claimed to have been hit by a Tesla in a busy gas station parking lot.

Around 4:00pm, Slidell Police responded to the 1400 block of Fremaux Avenue after Bates called 911 to report he was injured, after being struck by a Tesla. Bates told officers the Tesla backed into him, causing him to fall to the pavement, and that the driver then fled the scene. Bates was complaining of back, leg and neck injuries, resulting in an ambulance and fire truck to be dispatched to the location.

Slidell Police officers later found the Tesla and spoke to the driver of the vehicle. The driver stated that Bates intentionally jumped behind his vehicle and staged the accident. What Bates did not know was that Tesla records all the footage of their cameras.

When Slidell Police officers reviewed the Tesla’s video footage, it became apparent that Bates was lying and staged the entire event. Bates reportedly admitted to fabricating the entire event and was arrested for False Swearing with the Intent to Cause an Emergency Response.