Injured Dolphin Rescued from Canal in Slidell (With Video) 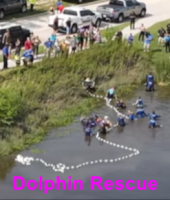 In case you missed the story, an injured dolphin was rescued Sunday (September 5, 2021) from Schneider Canal in Slidell, Louisiana. A massive group effort resulted in the injured dolphin being rescued after it was washed into fresh waters during Hurricane Ida.

City of Slidell officials worked with the National Oceanic and Atmospheric Administration (NOAA), who lead this rescue operation. Groups from all over the Gulf South converged to help rescue the injured dolphin, who was brought to The Institute for Marine Mammal Studies, in Gulfport, Mississippi, to be checked out by their vets.

The dolphin is OK and has been released back into the Gulf of Mexico! A satellite tag was attached to the dolphin prior to release to track its movement.  IMMS will be tracking the dolphin’s location through the satellite transmissions.