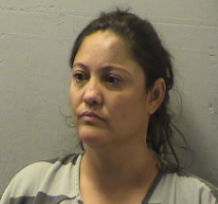 A Houma woman was arrested at a Covington-area gas station Tuesday (July 13, 2021) afternoon after she allegedly stole a vehicle in Slidell and drove it through New Orleans and back into St. Tammany via the Causeway before taking St. Tammany Parish Sheriff’s deputies on a pursuit northbound down Highway 190.

Shortly before 2 p.m. Tuesday, the St. Tammany Parish Sheriff’s Office was notified that a female had stolen a running vehicle from the Interstate 10 Rest Area in Slidell.  The driver of the stolen vehicle told deputies he left his work truck, a Toyota Tacoma, running while he ran in to the use the restroom at the rest area. The female had abandoned her own vehicle at the rest area before leaving in the stolen Toyota Tacoma.

Shortly before 3:30 p.m., STPSO detectives were notified by authorities on the Southshore that the stolen Tacoma was observed getting on the Northbound Causeway bridge, headed back toward St. Tammany Parish.

Several STSPO units respond to the north end of the bridge in an attempt to intercept the stolen vehicle.  Shortly thereafter, the stolen vehicle was spotted exiting the bridge and a vehicle pursuit ensued on Highway 190.  Sheriff's deputies were able to end the pursuit after the female driver entered the parking lot of a gas station just north of Interstate 12.

The driver, 41 year-old Regan Collins, was taken into custody without incident.  She was booked into the St. Tammany Parish Jail for Theft of a Motor Vehicle, Aggravated Flight from an Officer and Driving Under Suspension.  Bond was set at $45,000.00. An additional charge of Possession of Methamphetamine is pending after suspected methamphetamine was discovered inside the vehicle Collins abandoned at the rest area.

At the same time the pursuit ended at the Circle K Gas Station, there was an unrelated medical emergency in the parking lot, resulting in paramedics and fire district being on scene.

“This was a crime of opportunity,” Sheriff Randy Smith said. “Please never leave an unattended vehicle unlocked and running no matter how short of time you think you are going to be gone.”