Mayor Route Comments on Plans for Franklinton and Changes Coming 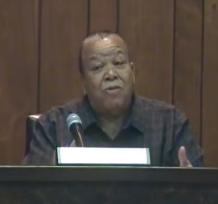 At Tuesday's (July 13, 2021) meeting of the Mayor and Board of Aldermen meeting, Mayor Route closed out the meeting with his comments. After speaking about the well-attended and successful fireworks display at the Fairgrounds, the Mayor spoke about plans and changes in the works for the Town. See the video below. They included