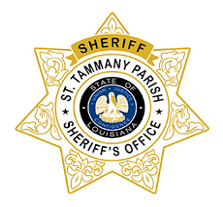 St. Tammany Parish Sheriff's Office deputies were dispatched shortly before 11:30 a.m. Friday (June 4, 2021) to the 2000 block of Timbercreek Lane near Mandeville after a neighbor called 911 to report a woman was screaming for help.

Responding deputies learned the woman and her adult son had been involved in an altercation that resulted in the woman being stabbed and cut on her face. When the deputies arrived, the son was found to be barricaded inside his residence. As deputies set up a perimeter, the suspect exited the rear of the residence and fled through a wooded area to a nearby pond, where he attempted to drown himself. Deputies pulled the unconscious suspect from the water and attempted life-saving measures, but were unsuccessful.

The mother was transported to a local area hospital, where she is being treated for non-life threatening injuries.

“It’s unfortunate that this domestic violence incident resulted in one person being injured and another person losing their life,” Sheriff Randy Smith said. “This individual was obviously in crisis, and my prayers are with the family at this time.”