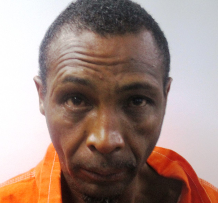 Today (February 26, 2021), Washington Parish Sheriff’s Office Deputy Randall Garcia responded to a complaint north of Franklinton of a male going house to house asking for water or a ride and attempting to enter one house before being rejected by the homeowner who called in the complaint.

While in the vicinity of Old Columbia Road and Jenkins Road, Deputy Garcia encountered a male fitting the description he had been given. While being patted down for weapons, the man resisted and attempted to pull away from the deputy. At this time he was restrained and placed in handcuffs. A search of the man’s pockets revealed a quantity of illegal drugs.

Phillip Fowler, age 51 and a resident of Bateman Road, was arrested, transported to the Washington Parish Jail and booked on charges of attempted criminal trespass, resisting an officer with force or violence and possession of illegal drugs.

“This is a good lesson for all of our residents,” stated Sheriff Randy Seal. “Always lock your residence, whether you are inside or away from home, and never open the door to a stranger. Common sense dictates that we be on guard at all times for persons who might be engaging in criminal behavior.”