Through the St. Tammany Deputy Sheriff’s Association, STPSO employees donated checks for more than $500 each to the Northshore Food Bank and the Samaritan Center thanks to the success of the annual Jack O’ Lantern Jamboree held October 30, 2020.

The money collected is in addition to a large donation of nonperishable food items which was divided and donated to the two organizations. 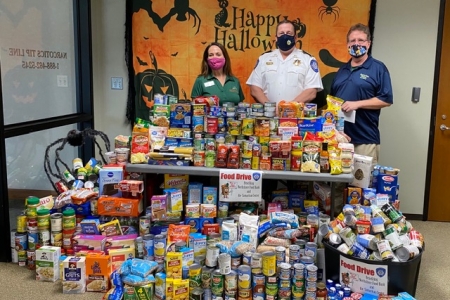 The Jack O’ Lantern Jamboree is held annually at the St. Tammany Parish Justice Center as a fundraiser for the two food banks, which provide food to needy families in our parish year-round.

For a $5 donation, administrative employees of the Sheriff’s Office, the Clerk of Court, District Attorney’s Office and Assessor’s Office were allowed to come dressed in costume and participate in a costume contest. The judges at the courthouse judged the costumes. Awards, which included trophies donated by the Deputy’s Association and gift cards donated by local businesses, were presented at the end of the day.

The event also included a pumpkin decorating contest, where for a $5 donation employees could enter a decorated pumpkin to be judged. Employees and visitors then voted on their favorite pumpkin by making donations. Employees of the Sheriff’s Office also held a bake sale to raise additional funds.

The non-perishable food items were collected during the month of October through “dress down” days, where STPSO employees could wear jeans on Wednesdays in exchange for a donation of canned food items.

“The food banks need donations now more than ever, and I am proud of our employees who despite this year’s struggles, donated both both money and food for our two local food banks,” Sheriff Randy Smith said.

To show their support for Breast Cancer Awareness Month, STPSO employees were also invited to individually purchase special breast cancer awareness T-shirts. They could in turn wear those T-shirts with jeans for a $3 donation for “dress down” days each Friday in October. The proceeds from the T-shirt sales and October “dress down” Fridays, which totaled more than $1,600, will be split between St. Tammany Parish Hospital and Slidell Memorial Hospital to be used for cancer research.  Uniformed deputies are given the option to wear the T-shirt underneath their uniform with approval.

"Cancer has touched many of our families and we understand the importance of raising awareness and will continue to support the search for a cure,” Sheriff Smith said.

Employees of the STPSO staff give back year-round by making voluntary weekly donations to a variety of charities in exchange for getting to wear jeans on Fridays.